Catwoman, as presented in the 1966 TV series and played by Julie Newmar, is my favorite film presentation of the feline fatale. She is funny, sexy, cool, and overall awesome. She lives her life for her own sake and no one else’s. 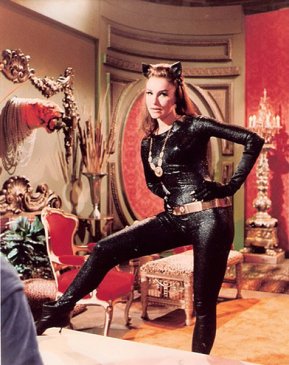 This Catwoman has been my dream cosplay for many many years so when it came to making it a reality, it had to be purrrfect. I had calculated the costs of what it would amount to if I wanted to make a complete Newmar Catwoman costume using readily available costume pieces on the net and the cost came out at a staggering $900. me-OUCH. I decided to just pick up any small pieces I could find as I went along and when the time was right, I knew it would come together.

The first piece I had luck with was one of my personal favorite parts of the costume: the belt.

Julie’s belt was a stretchy gold “scale” belt with a rectangular buckle that had a small flower at the front of it. Besides being a Catwoman belt, it’s also just all around beautiful. I was able to find one off of my best friend Ebay for around $20, and yes, it was vintage from the sixties so it is actually a true Catwoman belt.

I played around with a few different necklaces before I finally found one that was pretty near perfect. Sadly I don’t remember where… but I know it was in the mall so it had to have been either Charming Charlie’s, Charlotte Rue, or H&M.

Then came my biggest break: the suit. The bodysuit is difficult because it is NOT just a basic black… it is sparkly, but not sequined. Most catsuits are faux leather or solid black, and this simply won’t do for the 1966 design. But while I was browsing etsy one day, I came across a gymnastic suit that took my breath away. It was exactly what I was looking for: full, black, with just the right amount of sheen in the fabric. I quickly contacted the owner of the shop and while she confirmed that the piece she was selling would not fit my size, she would be more than happy to make me a custom piece from the same material. I leapt at the chance, and within a few weeks, I had the most perfect catsuit. I had paid around $50 for it, while most Newmar Catwoman outfits go for in the hundreds of dollars.

From that point on it was all small stuff. The whip and ears were simple to track down; any store that sells Halloween costume type pieces will be able to set you up with those. I wanted to give the ears a touch of glitter to match the rest of the suit, so I glued the top of them together to give that specific cat-like point and then I coated the entire thing in some clear glitter glue which I happened to have. I got lucky finding the boots on sale at Kohls. The gloves I got off the internet, but they weren’t quite ready to be added to the costume as they were. Catwoman has beautiful golden nails on her gloves, and the only idea I had been able to find during research was to glue faux nails painted gold to the end of the tips. That seemed very unreliable to me, as I feel like they would either fall off or break. So I went on ebay and ordered a dozen of the oddest rings I’ve ever seen: Lady Gaga style “nails”, where they only cover the top edge of your finger. I opened the ends of the gloves and attached the rings in the fingertips before sewing them back/securing with glue. This way when I put the gloves on I can put my fingertips into the ring and that holds the gloves properly so that they don’t slip or tug.

For makeup, I used a light pink lipstick with smokey eyeshadow and some basic eyelashes that I had lying around. Her eyebrows are designed in the series, so I repeated that my using an eyebrow pencil to make a few waves coming up through the eyebrows.

And voila! My dream cosplay happened. I loved it so much that, thus far, I have worn it to two comicons. I have always gotten lots of compliments and in 2015 I was voted in the top ten of fan favorite costumes for the comicon on Sunday, according to the vendor who was running the poll. I am always so happy to meet people who love Julie Newmar’s electrifying performance as much as I do. And when I remember that $900 estimate which I came up with initially, I am glad that I decided to do it my own way.

In 2015 we got to meet Billy Boyd (aka pippin from Lord of the Rings) and he did a double take when he saw us and then announced: “You look AMAZING!” Needless to say I’ll remember that moment for a long time. =D Coincidentally, my friend Lizzi is wearing the Raven costume that I put together a few years back… there’s a page about that process here on my blog if you want to know how it was done. She models it far better than I do!

Spanx – Ebay (user nawtyfox) – $12.95 <- If you are thinking you can take this off because you don’t need it, think again. Spandex always requires spanx because UNDERWEAR LINES.